It is weird how I always believed that nothing bad would ever happen – at least nothing majorly bad. I now blush at my idiocy. Life isn’t meant to be fair. Not even for a 3 year old.

I did not attach much weight to the many possible complications that the doctor had informed us about. They were mere possibilities in my mind. I won’t deny that while I tried to stay positive and strong there was an underlying uncanny feeling that constantly tugged at my heart. They say when you want something the universe conspires to achieve it – total BS! I never thought that such complications would happen. I had only wanted Ira to get well soon, to take her home to her toys and her friends and to protect her from any further harm. How then did it not happen?

24 hours after her surgery and more than 8 hours after she was off sedation Ira remained drowsy. Though she spoke to me, for one last time, she seemed to be in a kind of stupor. Sometime towards the end of the evening a very strange phenomenon was observed. At certain undefined intervals Ira moved her limbs, both hands and legs, in a cyclical fashion. “She’s waking up. Don’t worry,” the doctor said. “She has 50 % weakness on her left side.” Yet, she moved all four limbs with the same vigour.

The nurses’ shifts changed at 8:00 pm and Meenu sister left to be replaced by sister Ankita. Having Ankita sister around was a relief because I could converse with her in Marathi. This may seem quite trivial given the fluency that I have with Marathi, Hindi and English, at least in conversations. However, 95 % of the nursing staff at Bombay Hospital is from the South of India who do not understand Marathi and prefer Hindi or mostly English. For once that night I was relieved to be able to talk and express in a language that both the parties could understand well without having to worry about ‘what I want’ and ‘what I am saying’ exactly.

“She hasn’t woken up again”.

“Why is she flailing her arms and legs?”

“Why is her heart rate increasing when she moves her limbs?”

I kept asking questions but received no satisfactory answers. Ira’s vital parameters were being monitored and displayed on a patient monitoring unit typical of an ICU. Every time she moved her limbs in a cyclical manner at intervals her heart rate and respiratory rate shot up. A toddler’s heart beats 65-110 times per minute when awake and 65-100 times per minute when asleep while maintaining a respiration rate (RR) of 20-25 breaths per minute. Ira’s heart rate went upto 160 to 180 beats per minute (bpm) and her RR increased to 40-50 at frequent intervals. Whenever the vital parameters spiked the monitor beeped – loud enough to scare me to the core.

As a parent to a 3 year old child who had just undergone a surgery I was allowed to stay with Ira in the neuro-recovery room. There was no other non-medical staff or family members there at night after 9 pm. A security guard was not required because they locked the whole place including the waiting area. This meant that the family had to return to the dharamshala rooms while I stayed with Ira till the door opened again in the morning at 7 am.

At 11 pm I rang my husband. He didn’t answer. I then rang Ranjeet mama who answered on the last ring. He could sense the panic in my voice as I told him about the heart rate.  “Do you want us to come to the hospital?’’, he asked. “No point. The whole area is locked up. You can’t enter beyond the waiting area. I’ll keep you informed”, I assured him feeling guilty of having woken them up.

A little while later Ira seemed to relax. All the abnormal activities ceased and I breathed a heavy sigh of relief. Ankita sister gave me a cozy fleece blanket for the night as I lied down on Ira’s bed- my face towards the monitor placed behind Ira and legs dangling downside from the bed. I wrapped myself against the freezing temperature of the room with the fleece blanket and dozed off after a while. I woke up a little later with the monitor beeping in my ears. Ira’s heart rate! It had again shot to 180!

“There’s definitely something wrong sister. Please call a doctor”. Before the words were even out of my mouth I saw Ira’s body going rigid, very rigid. She extended her arms and legs as if someone was pulling her and stretching her.

“These are seizures!” I said. Ankita sister called another nurse for help, asked me to wait outside while she pulled the curtains around Ira’s bed. I waited beyond those curtains, holding myself and occasionally wiping off tears against the sleeve of my top. I did not dare to interfere in their activities for fear of distracting or delaying them.

Ankita sister appeared from behind the curtains, ran down the corridor to the telephone in the nurses’ station.

“Don’t worry. Doctor Rushikesh is coming”, she tried to reassure on her way back to Ira.

Ten minutes later the doctor arrived half-running, went behind those curtains and returned to me half an hour later.

“Explain to me what you saw”, he said. I mumbled and he nodded.

“They were seizures. Everything is under control now. Don’t worry. A neurologist should be here shortly. I am still trying to reach him.”

I walked back to Ira. The curtains were now pulled apart. I sat beside her, held her hand and sobbed as softly as possible. A small tube appeared from the site of surgery which ended in a bag fixed to a stand at a certain height.

“We are going to monitor her cerebrospinal fluid (CSF). It had increased which led to the seizures. See the drops being collected in the bag? That will be monitored until morning”.

“Get some sleep ma’m. She’s alright.”

“Do you need another blanket?”

I woke up frequently at night having dreamt the same dream every time that the drain had stopped. The next morning as the doors opened at 7 am mama and Tejas walked in. I almost ran towards them and collapsed in Tejas’s arms sobbing and talking at the same time. After that eventful night I never stayed alone in the hospital ever.

What are involuntary movements?

There are different ways of managing the different types of movements. Dwelling on this here would not be possible. However, Ira’s so-called involuntary movements- moving all four limbs in a cyclical fashion, left the doctors perplexed. Dr. Deopujari had not seen anything of this kind in his career spanning over two decades. During the interval of these movements Ira was often in a stupor and when she was awake she looked dazed and kept staring in space. These involuntary movements persisted for almost a week, mostly all round the clock till Ira was put on a high dose of an anti-convulsant and sedative. We had some of the best neurologists visit her during this span from some of the top-notch hospitals in Mumbai. None had seen this kind of phenomenon before. This made management of the movements very difficult, like a shot in the dark. Also, the thalamus is associated with involuntary movements and since Ira’s was a thalamic glioma she was likely to experience such movements, we were told by the doctors.

Also known as convulsions or fits, seizures are a result of a sudden surge of electrical activity in the brain.

This video from St. John Ambulance talks about seizures and what to do if someone is having a seizure. Remember the first thing to do when you see someone having a seizure is NOT to freak out. Stay calm and follow the instructions in the video.

Seizures can be managed with medicines, commonly called anti-convulsants. There are different ways in which a seizure may manifest itself, some can even be of the silent type. Seizures are diagnosed by performing an Electroencephalography (EEG) test. An EEG is like an ECG, except that the electrodes are fixated externally around your brain instead of the heart. 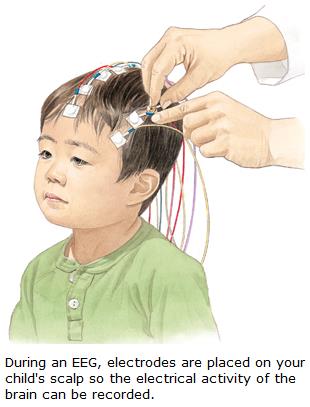 Seizures can lead to disastrous outcomes especially if they are a result of hypoxia or lack of oxygen to the brain. They are ill-common after a head injury or brain surgery. Ira’s seizures were severe resulting in loss of speech. They occurred primarily due to hydrocephalus (increase in CSF in the brain) and may have been an outcome of the surgery. I’ll talk more about hydrocephalus in the next blog.