An airy and luminous room. Light poured through the windows, but sunlight failed to reach where I sat, on the first bench in the middle of the classroom (in the later years I translocated to the back benches, for better education as they say). I was of an age when I could easily move in-out of the wooden desks without banging my knees against the sides of it.

Miss Naomi walked up and down the many lines of benches, her heels clacking. She usually taught us Geography, but the question doing the rounds in the classroom was, ‘what do you want to become’?

I felt enkindled and overawed by the lean and suave Miss Naomi. Had even started taking an interest in Geography. I don’t remember what the other girlies answered. I remember mine even 25 years later.  “I want to become a teacher”, I said. Probably a few giggles here and there. Miss Naomi ‘almost’ laughed good-naturedly and said, “Pratima, you need to stop talking first.” Yeah! I was a notorious child upto that age, chatted perpetually right under the teacher’s nose.

“I want to become a teacher.” We’ll see about that.

I was walking alone through the crowded lanes of Raviwar peth. Picking up a few things that mom needed. In those days of no-GPS and no-mobiles, imagine how difficult it was to locate a complex. Especially here, where upon asking you’d only get more directions to one place. Such was the case that day. I decided to try only once again before I forgot the way back to where I had parked my cycle. May be my-dear-complex was at the end of this road. As I took the ill-famed and shady-appearing road of that part of the peth, I clutched my sack to myself, put my head down and briskly walked that stretch. Through the corners of my eyes, I caught glimpses of not-so-fully covered women, standing at every door beckoning men, and a baby on a woman’s hip. I have very little memory of the afterwards. I remember brooding over it for days, feeling disquieted and galled.

Can I do anything- anything at all – to empower such women and children? We’ll see about that.

This was a year of slight disorientation. I lacked clarity on choice of education stream and career scope. Subject choice was relatively easy. I had as much love for biology as disregard for mathematics and physics. That left me with either medicine or life sciences. Medicine made me wary for only one reason – haemophobia. The sight of blood made me uneasy, caused dizziness and often pukish. So, I pursued Biotechnology.

Haemophobia. We’ll see about that.

I had this geeky image of myself clothed in a white apron (with pockets to put my hands in) working in a hi-tech laboratory, surrounded by chemicals, glassware and equally nerdy peers. Discussions over breakfast and lunch would be around the best happenings in research. I’ll complete a Ph.D. A post-doctorate too, maybe.

Instead, I worked as a quality analyst testing drugs, attempted for Ph.D. twice and then gave it up altogether for starting a family. In between this I did think of getting underway a pre-school, which as is evident didn’t materialize.

Ph.D. Pre-school. We’ll see about that.

Quoting Dr. A.P.J Abdul Kalam, “You have to dream before your dreams can come true.”

And then another wise man said, “Dreams don’t work unless you do.”

We all have dreams. We have thoughts. Ideas. Often left lying in our heart and mind. Then another dream, another thought or another idea is formed, layering over the previous one. A few result in action. Few die an early death – bridled by the ‘ifs’ and ‘buts’.

I could have become a teacher. Could have started a pre-school. I love children. Find them extremely cute. In fact, had the pre-school happened I perhaps wouldn’t have spent time watching baby and toddler videos on Instagram (blame my sister for that!).

I could have become a doctor. Ira’s doctor said so too. Probably would have overcome the haemophobia during the course of learning medicine, which I anyways did battle in those 18 months of Ira’s treatment.

Maybe I could or should have sat for the Ph.D. exams. BUT I wanted to start a family – have a child, not more than one and it would be a girl. We did have a girl child born to us, only to be taken away preposterously. It left a void. It left us goal-less. Every plan, every action and every goal revolved around that one tiny being. I went from full-time to part-time work. I gave up the thought of doing a Ph.D. (there are several other reasons for this).  I changed the work profile so that I could work from home, spend more time with Ira – take her to the garden every day, read to her every day, do whatever she liked to do every single day!

You see now don’t you? We live in a world of being busy. We often want to do things completely different than what we are doing right now. We side-line our dreams for this reason and that. I recently heard from a sweet friend that she was waiting to settle down before having a child. I don’t know what she meant by that. But each of us does that. Wait, for the time which we think would be right. Alas, that is never so. Go fetch you dreams, please. Before it’s too late.

Not all has been so somber in my life. I have aggressively been persistent to – become the games captain at school, to win a gold medal for academics and sports at Nirma University, to balance work, writing, Ira & home, taking a trip with Ira and many tiny other dreams have come true. 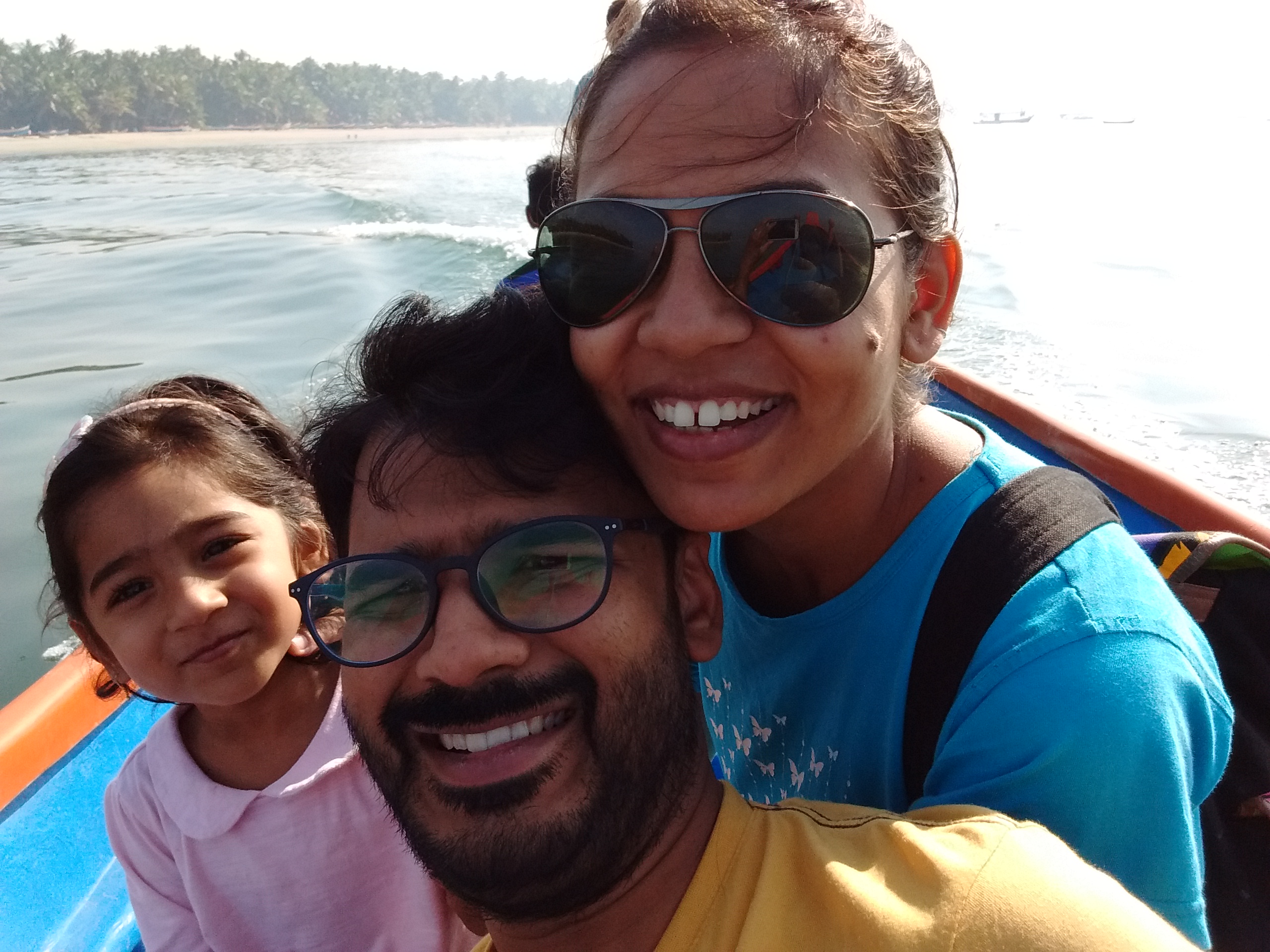 A trip to Tarkarli beach with Ira & Tejas (December 2013)

But like one has to declutter or revamp a house, we’ve had to re-align our goals. Forget those of which Ira was a part of and bring into focus new ones. So beginning 2020, I set goals for – home, work, writing, fitness, reading & volunteering. Short-term goals, because each will take time to get rolling. And something inside me tells me, these goals will materialize and these new dreams will come true!

As you take a step back from being busy, during the corona lockdown, take a step inside. Don’t be afraid to ask yourself “what do you want to become”, reflect on your ‘layered’ dreams and dig deep within for the ‘good’ power. Get rid of the ‘we’ll see about that’.