FACING THE ODDS – TRAUMA AND DEPRESSION

There’s an article somewhere on this blog on ‘How To Train Your Mind To Not Be Anxious’. This post is second in that series of mental health related articles and deals with sensitive topics like trauma, depression, and suicide. Thought I should just give a heads up.

If I had to describe to you years 2017 and 2018 pictorially it would look like this.

Love for all things chocolate.

Think of those as lockdown 1.0, as it were. Every waking (and sleeping) hour was spent by Ira’s side. It was a non-stop care taking activity, managed well amongst the family members.  I severely cut down on socialization in person and over the phone, not because I would feel stigmatised but circumstances warranted full care. I stepped out occasionally to binge on food or chocolate stuff. Not otherwise, that is until I started running.

I will let you on a secret.

I have not been as strong and courageous as I might have appeared, or some may have assumed.

I felt helpless, grappled with anger, fumbled with anxiety, and underwent immeasurable grief. At 31, I thought I was on the bottom most rung of the ladder – emotionally, mentally, personally, and professionally. The entire episode inflicted too much pain and caused too much damage, to the mind and body, some effects of which were far from visible and begun to show quite later.  I term it as collateral damage.

In medicine, trauma is defined as a physical injury to a body part.

According to psychiatry, trauma is a deeply distressing or disturbing event. Ages ago, in the history of trauma, it was limited to war veterans, who faced violence, lived for survival, and spent years estranged from family. Since then the definition of events causing trauma has expanded to include physical and mental torture, being involved in an accident, mass shootings, natural disasters, domestic violence, abuse, bullying, and even heartbreak. These days, it includes everything under the sun that causes us discomfort in the slightest way.

Events leading upto trauma may cause several debilitating effects – physical and emotional.  What it likely does is leave an irrevocable impression on the mind, strong and deep like the footprints of an elephant. What you saw with your eyes and felt in your heart essentially becomes fixated into your mind. Rest of the symptoms are mere carryovers of this.

Ira sustained physical trauma to the brain and subsequently to other body parts, which translated into emotional and mental trauma for us. It is hard to push aside images of her involuntary movements, seizures, rigidity, indigestion and the sounds of the ventilator, her abnormal breathing patterns and her wails at a prick. I cannot forget the day Ira left us. How her breathing rate first increased and then dampened, how her heart kept slowing down, how her eyes remained closed, and how I intuitively felt that she was slipping away.  That day is like a reel playing itself repeatedly, whenever it feels like.

It affected my sleep terribly. I had difficulty sleeping and woke up at odd hours no matter how tired I felt at night. The dreams were the worst enemies.

I once saw Ira and myself playing in a pool. She suddenly dived deep into the water. I dived after her trying to save her. Together we kept going deeper, me trying to enclose her while she sat cross-legged (in the water) with a smile on her face. When we touched the bottom, I tried to grasp her to bring her out of her reverie. She gently smiled and said, “Don’t worry mama. I am happy wherever I am. I am alright now”. That’s how helpless I have felt.

Depression is defined as feeling of extreme dejection or despondency. Being mostly in low spirits with no standard road for overcoming the period. Psychologists attribute depression to psychological (thinking), social and even biological causes.

Like trauma, there is now available a wide definition and causes of depression. We are quick to feeling dejected nowadays, as quick as a wink. But that is not the point of this post. Research increasingly cites alteration in neural activity due to these causes leading to change in brain function.

After the initial shock and denial there was helplessness, anger, grief and remorse bordering on aggression and suicidal notions. I never had so many negative thoughts run through my mind at once like a hundred people running, storming and tromping to board a train about to leave a platform. I stayed away from social media which seemed unrealistic, socialized less because I felt underserving and guilty of being happy, watched and cried in silence Ira’s pain and suffering, experienced loss of control and meaning, and every single time I felt like ending it all –pain, sorrow, incompetence and weakness. All this changed the functioning of my mind, translating into pangs of anxiety, lack of sleep, loss of appetite, increased forgetfulness, rise in inattentiveness, and surge in fear.

Each time I wanted to give up. Just let go.

I hate to admit that I often thought of suicide. It was a fleeting notion in my mind, but I don’t deny its existence. Not because I did not want to live. I love the idea of living and loving. But I desired an end to the pain and suffering. There were days when I felt I couldn’t take it anymore.

Katelyn Tarver’s song ‘You Don’t Know’ sums it up beautifully.

I am slowly working through it all. Trying to collect the ruins to reconstruct my mind and life to what it was, to restore the homeostasis. Yet, the scars will show themselves. There are these tiny triggers – a line in a book, the lyrics of a song, a photograph, etc. that brings it all rushing back.

It’s easy for others to tell me I’ve changed, I am not myself, I forget easily, I am being cautious, and I am over-thinking. Well, yes. May be. Perhaps there is no going back. Probably I will become a better version now. Don’t judge me for how my thoughts tortured me, for feeling like giving up and for being however I am. You don’t know what it was like!

And yes, it is different for different people. The reasons, causes, and effects of depression and trauma. What is important is reaching the other end of the tunnel, holding yourself up, and even letting others carry you through.

So, why discuss this now? Why did I feel the need to let the cat out of the bag?

To let you know you’re not alone.

Mental illness is widely spoken about, yet not well accepted. Circumstances may make you feel lonely. “This is happening only to me”, “I am all alone in this”, “Nobody can understand”, etc. If this does happen you know who to call out to.

Depression is hard to comprehend and complicated to explain. So be easy on yourself and on others around you. Try to shake it off while allowing time to restore the balance. No overnight magic will make the depression and trauma disappear. Being patient is key.

Sometime back I wrote this on Facebook, and many seemed to agree. 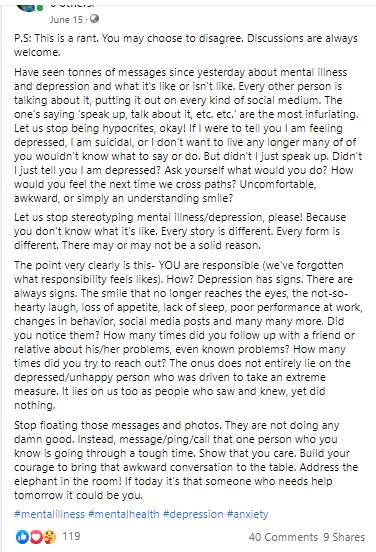 In the next post, will talk about what helped me overcome these odds. Meanwhile, leave your comments below. Your thoughts make writing worthwhile.