THE BRAIN TUMOUR TYPE – A REALITY CHECK AND A MISDIAGNOSIS

Bombay Hospital is a huge place, harboured in three separate buildings- old, new and not-so-old one! A modern and tall structure nestled into the narrow lanes of Marine Lines and surrounded by age-old residential buildings, tiny hotels and even a theatre. It looks discreet and unfashionable- unlike the theatre standing opposite its gate, a commonplace for movie promotions, film festivals and premier nights. What a strange place for a hospital to be! The only sign of its presence in the vicinity was the numerous drug stores in the area.  The few trees lining either side of the road converged overhead to form a canopy at some places giving refuge to the pedestrians, cars and chaiwallas from the heat and humidity, characteristic of Mumbai.

However, it’s quite a different world once you are inside. As if a reality check. You realize that there is this other side to life that is unhealthy, unbeautiful and repellent in all respects. Except on Sundays, the hospital is like a full house with patients being wheeled on stretchers or wheelchairs, family members milling about, and nurses and doctors striding along seemingly in a hurry. It is a place for awkward conversations, widespread fear and wishful thinking.

While inwardly I worried, Ira’s playfulness brought me hopes. Someday everything would be alright, I silently promised her. We were visited by many members of Dr. Deopujari’s team. Ira was once again asked to walk, run, talk, see, observe and follow. She quietly obliged, often not always. But she never complained. Never ever!

Routine tests followed – blood samples, X-ray and a 3T contrast MRI. The nerd in me took notes of who came when, what she ate and who said what till I learnt that the staff made notes too. And of course there were the questions for Dr. Deopujari.

“But there were no symptoms, till it grew so large!” That’s surprising because the tumour is supressing many areas of the brain especially the vision.

“What kind of tumour is it?” It looks malignant. We’ll be doing a neuronavigation-guided biopsy. Now what was that? Neuro-something something…biopsy!

“What are the possibilities?” There is always a possibility of complications like infection, comatose, etc. Ira’s left side is prone to paralysis. If everything goes well you should be able to take her home in 15 days!

“Sir, what about expenses?” Estimated is 6-7 lakhs. You can get a detailed estimate also.

Ira underwent a burr-hole biopsy a day later.  They analysed a frozen section for immediate results and sent the rest of the sample for histopathology.

In the doctors’ words, “The tumour type is probably pilocytic astrocytoma. Let’s wait for the detailed histopathology reports. It will take 2 days. If the tumour is low grade we’ll proceed for surgery and if it is grade II we have surgery and radiotherapy or chemotherapy. If it is high grade we can’t operate, we’ll have to have a discussion then”.

By definition, histopathology is a microscopic examination of tissues in order to study the manifestations of disease. It is a vast subject by itself and cannot be dealt with as part of this blog.

Two days later we got the reports positive for pilocytic astrocytoma. Grade I tumour which is relatively benign or 100 % benign. The surgery was planned for 4th May 2017 and it happened at the appointed hour.

Except the tumour type was NOT pilocytic astrocytoma.

Upon the doctor’s suggestion we also submitted the tissue samples to Tata Memorial Hospital in Lower Parel, Mumbai. Astonishingly the report suggested that the cells were similar to pilocytic astrocytoma but not the same. Further test for BRAF gene mutation was advised. Pilocytic astrocytoma are positive for BRAF gene mutations. The second report, 2 weeks later, stated negative for BRAF mutation, but the tumour was low grade! Now the questions arose – if it is not Pilocytic Astrocytoma which type is it? Fibrillary astrocytoma probably, or a PNET? Somehow it felt important to know the type of tumour. We scourged the internet for types, trying to correlate the markers and the morphology through research articles and reviews. What we read was extremely scary! We immediately requested a meeting with Dr. Epari Sridhar, Head of Histopathology at TMH. After a long discussion, by the end of which he almost ran to catch his bus, he agreed to conduct some further tests for likely mutations to determine the exact type of tumour. But it was not until July that we learnt of it i.e. almost 2 months after the surgery! 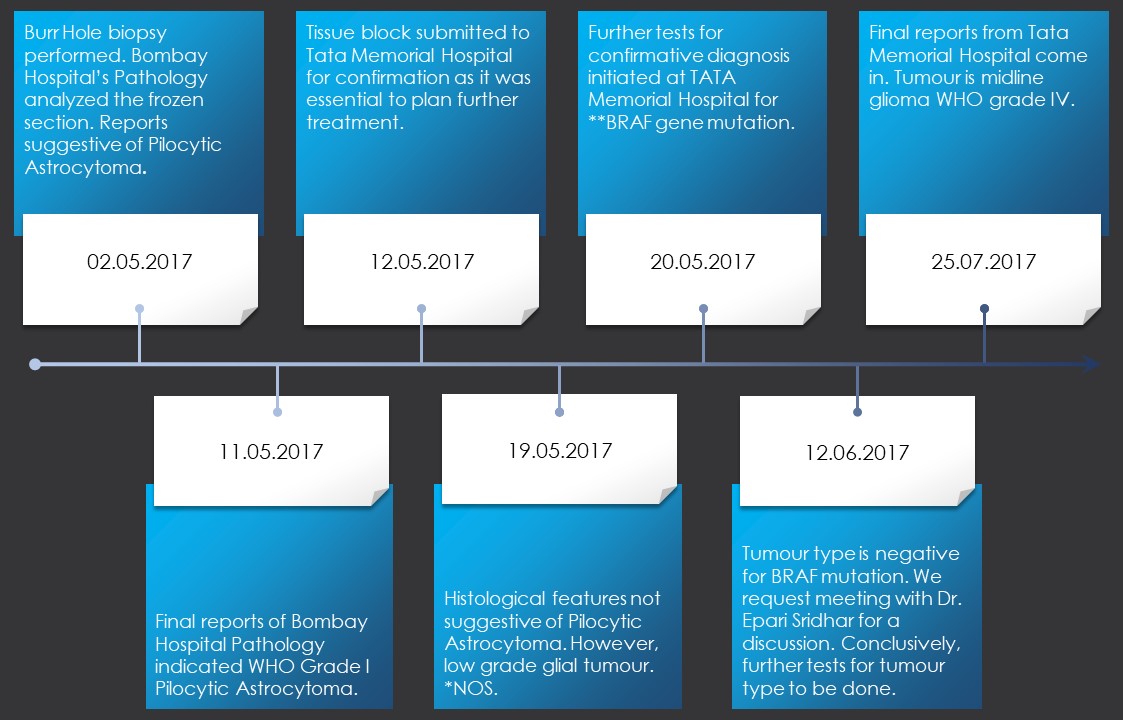 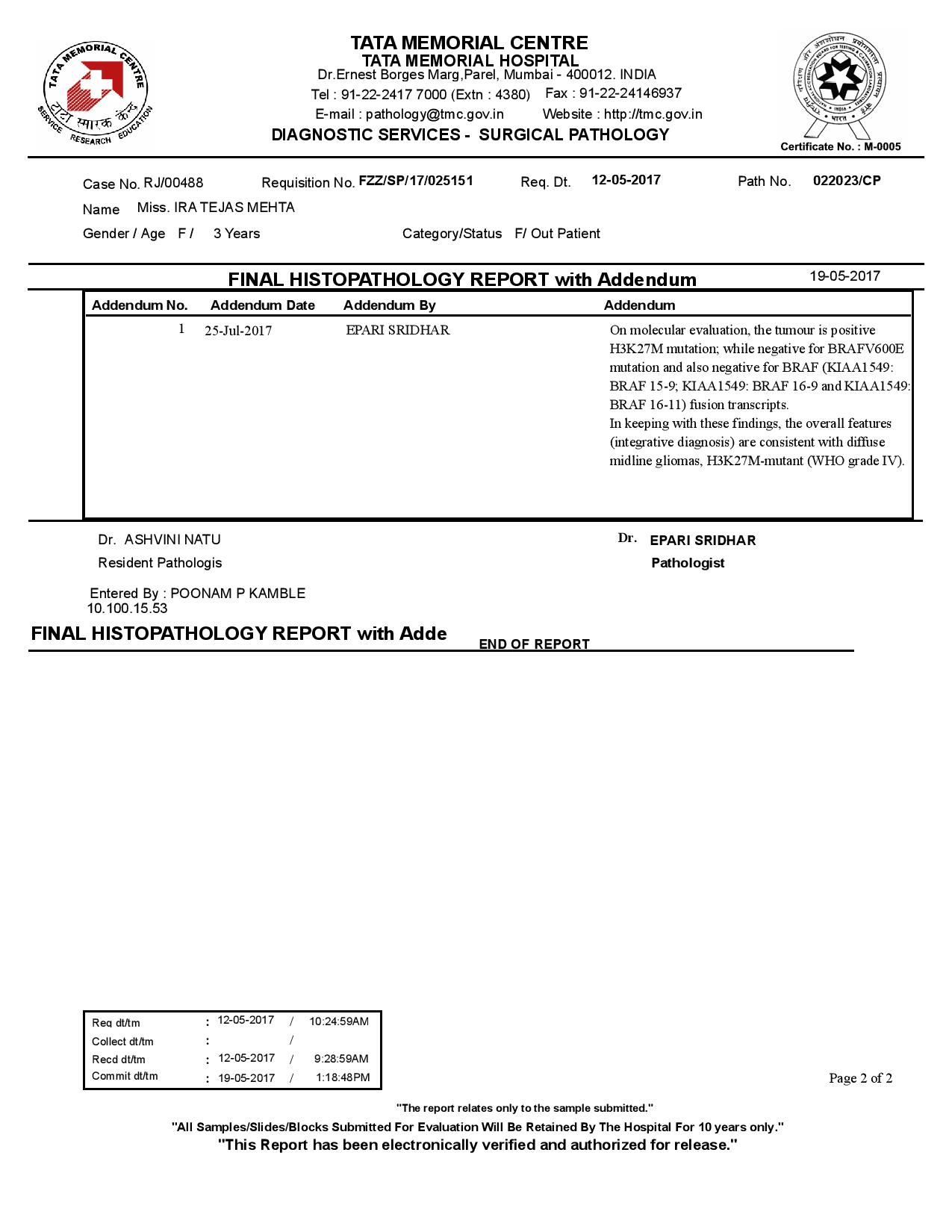 This type of solid tumour is very rare. In fact, it was added as a specific entity of CNS tumours to the WHO list in 2016. Moreover, such tumours have a dismal prognosis often resulting into fatalities. Dr. Anand Doshi was clearly right about Ira having not more than 6 months of dear life!

A clear case of misdiagnosis!

When I think about the sequence of events last year following the surgery my mind plays devilish games of ifs and buts- mind against mind! One of the primary being:

WHAT IF she had not had the surgery – BUT the tumour was very large and caused pressure.

I recently chanced upon Fiona Lundell’s story, diagnosed with thalamic glioma (like Ira’s) at the age of 5, who did not undergo a surgery and eventually succumbed to the disease 6 months later. This broke my heart completely! Not only because Fiona’s is another tale of childhood cancer but I learnt that thalamic gliomas are inoperable! Words are not enough for the guilt I feel for making a wrong decision for my child, the anger towards the medical fraternity and system in India (for the misdiagnosis and lack of awareness) and the pain of having put Ira through such an ordeal. “We did whatever we could at that instant” offers me no consolation when days get bad and the heart overflows with an eclectic mixture of emotions.

Guess down the line I have been able to find some answers, while others have still remained elusive.

There is no dearth of content on the web. However, here are a few articles which hopefully other families and individuals might find useful, making it easier upon them to take decisions.

Do you know of any cancer institutes like these in India? Please feel free to share here.