For a lot of us, talking to a grieving person or family can be quite a challenge. How do I ask? What will he/she think? Is this the right thing to say? People either dread the answer or the uncomfortable silence. How you ask and what you say rarely matters, especially if it is well-meaning. Inaction (in not asking at all) and insincerity is far worse than that.

A huge thanks to all those who have kept asking after Ira, keeping her and our family in prayers and for being there. You know who you are!

“The truth is rarely pure and never simple”, as written by Oscar Wilde.

A usual conversation around Ira has mostly been like

“She’s ok.” This is a standard reply I give to most.

“There are good days and bad.” If I am in the mood to elaborate.

If truth be allowed, she is anything but ok.

“Terrible, thanks for asking.” The honest reply.

It’s not that I am not open to discussing it. I have not shied away from elaborating on her condition to those who have asked for details but it is very difficult to gauge the circumstances of her health. The reality does not set in until you see her. So, for all those straight-from-the-heart questions about Ira here’s the bitter truth.

An old friend who had recently gained knowledge about this subject had mistakenly assumed that she is no more. I didn’t mind the question as much as the fact that probably my posts on social media and on this blog do not effectively convey her health. So as I write this, yes she is alive.

Barely and not verifiable. The extreme trauma that her brain suffered has resulted in a lot of damage of the white and grey matter of the brain including that of the cortexes. She is only responsive to touch (tactile sensation) and pain.

You can download the GCS assessment aid here. This is useful for monitoring progress of patients post-surgery or after critical brain injury.

Does she talk little-little?

No. Ira lost her speech one day after the surgery in 2017 and gradually the ability to express. She cannot tell us if she’s hungry, in suffering, wants to walk & play, or go to school. Not a word. Not an expression (except of pain).

How does she eat?

Ira is fed through a nasogastric tube (NGT) or Ryle’s tube which goes from her nostril to her stomach. Feeding entails attaching a syringe to one end of the Ryle’s tube through which liquid diet is provided every 3 hours.

What are the chances of recovery?

None. Ira’s reports have been circulated widely to doctors, friends who know doctors and family members who know doctors. We’ve consulted over 30 doctors in India, USA & UK sharing with them each and every report and file and each has surmised her health as complex and critical with advance pathological deterioration.  Her latest MRI is a proof to their claims.

How do I manage?

Ira is being taken care of at home. She’s like a baby albeit one who can’t see, walk, eat or express. Nonetheless she’s our baby and is managed the way an infant is. And I am not alone in this. It’s a team effort really. I have every member of my family helping me out in whatever way possible. It wouldn’t have been so tolerant all this long without them.

Does she sleep at night?

Well, she does mostly. The medications cause drowsiness and hence she’s mostly sleeping and comfortable.

So, what is the current scene?

Ira’s condition has medically deteriorated over the last year. She is however clinically more or less stable, which means we are in for a long haul. She is subject to severe spasticity and seizures and is managed with allopathic medicines. The current management program, as guided by Cipla Palliative Care Center, is to keep her as comfortable as possible with symptomatic medications.  No surgical interventions and curative treatments are advisable.

“But miracles do happen.”

As Tanmay once rightly said, “we HOPE for a miracle, but do not EXPECT one”. As family and parents we have come to terms with and accepted Ira’s health. All that is left is to give her as much care as possible and all the love that every child rightly deserves.

An explicit understanding of her condition may not be possible, I assume. But I would like Ira to be remembered for the mischievous, ever-happy and playful child that she was. 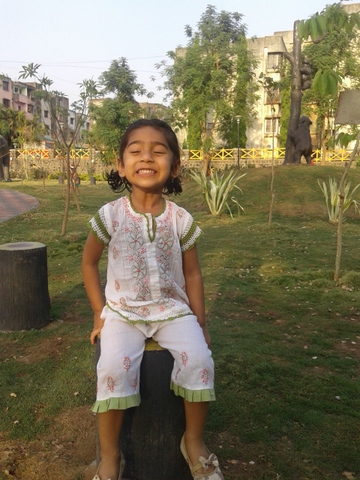 Ira in a playful mood at a garden in Pune.

Otherwise, there are bad days and good ones too.

The title of this blog post is actually credited to a podcast by the name Terrible, Thanks For Asking (TTFA), hosted by Nora McInerny. This show features conversations with people talking honestly about pain, awkwardness and humanness. And it is therapeutic too! Do give it an ear, it’s one of my favourites.