I have been quite off-the-grid lately. Writing a post after oh-so long time!

Does it happen with you? You have set your mind to doing something, you begin with all determination and b-a-n-g pops out an obstacle and then you have to stop doing what you so so so wanted to accomplish. Well, it definitely happens to me. ALL THE TIME!

I sit down to write and here is what happens…

…..appearance of guests & relatives, or

…..’I am not feeling in the mood today’ attitude, or

…..even a sudden appendixotomy (mine, not Ira’s thankfully) which meant surrendering to complete rest.

Excuses apart, I want to begin from where I left off in the previous post.  So here’s a quick recap.

Ira faced several complications after she underwent a 7 hour long surgery for a right thalamic glioma. Seizures, involuntary movements, hydrocephalus, meningitis & ventriculitis namely. I have tried to discuss and summarize the effects, consequences and management of seizures and involuntary movements previously. You can read the full blog here.

As the name implies hydro – water and cephalus – brain, is a condition of water on the brain or in the brain. Under normal conditions, the cerebrospinal fluid or CSF flows in cavities or ventricles, deep within the brain, and the spinal cord. Accumulation of excess CSF in the brain causes pressure to build up in the skull. Hydrocephalus can be caused due to a birth defect or may be acquired later in life due to meningitis, brain tumours, traumatic brain injury (TBI) or intraventricular haemorrhage, and subarachnoid haemorrhage.

Ira’s tennis ball-size tumor sat closely to the 3rd ventricle (there are 4 ventricles in the brain) resulting in mild hydrocephalus prior to the surgery. Apparently, this problem was magnified post-surgery. I cannot explain how. Dr. Deopujari had mentioned in the passing on day two of post-surgery that Ira may require a shunt. However, the petrification and confusion over the strange involuntary movements caused a shift in focus.

Normally, the treatment involves surgery, most likely implantation of a shunt system. A shunt is surgically placed to drain excess CSF from a ventricle in the brain to the abdomen, heart or lungs. With Ira’s involuntary movements and later meningitis & ventriculitis, management of hydrocephalus involved placing a reservoir (ommaya reservoir) under the scalp attached to a catheter placed in a ventricle. Excess CSF was aspirated from the reservoir which was externally attached to a bag. This system typically functions like a urine catheter. 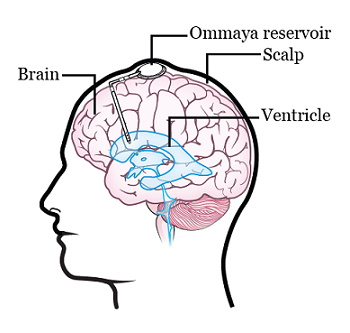 An ommaya reservoir is placed surgically below the scalp for CSF aspiration. It may also be used for intra-tumoral chemotherapy.

Frequent aspirations from the ommaya reservoir may lead to infection of the meninges or ventricles in such patients. AND this is exactly what happened to Ira next.

Meningitis and ventriculitis is inflammation of the meninges and ventricles, respectively, caused by pathogens. Simply put it is an infection in the brain. Ira caught an infection of the ventricles (situated deep in the brain) a week after the surgery. Ira had an ommaya reservoir placed below her scalp near the right frontal region. Excess CSF was aspirated from the reservoir daily to keep hydrocephalus under control. The bacteria identified as Acinetobacter is one of the most common germs present on the surface of our skin. The CSF is one of the most sterile fluids in our body. It contains zero to eight number of white blood cells (WBCs), it is supposed to be that clean. Ira’s CSF was found to contain near about 43,000 WBCs, it was severely infected.

Like any infection, meningitis and ventriculitis are managed by intravenous antibiotic dosages. Ira was given 5 intra-ventricular antibiotic injections, directly into the ventricles through the ommaya reservoirs. She was managed with 3 different types of antibiotics intravenously round the clock. When the infection refused to subside substantially Ira was put on an antibiotic that is rarely given to children below 8 years of age. More than a month later when the results declared her CSF almost sterile a shunt-system was inserted for permanent resolution of hydrocephalus.

Meanwhile, the deep-seated infection caused blockages in the flow of CSF in the brain. This lead to severe hydrocephalus in different quarters of the brain, therefore each quarter was surgically implanted with an ommaya reservoir to drain the excess fluid. Including the biopsy and the main surgery Ira was operated 8 times in a span of 2.5 months to manage the several complications she faced. Here is a gist of the dates and the episodes.

20.05.17 – Change of ommaya reservoir & removal of frontal bone (yes, she still does not have a small part of the skull in the right frontal region)

24.05.17 – Change of ommaya reservoir (the previous one got blocked and displaced)

30.05.17 – Implantation of ommaya reservoir in left frontal region (there was a major episode of ventricular blockage and seizures on 30.05.17 when we almost lost her. I still can’t get myself to describe what I say happening to her, but the day was my breaking point.)

As each complication happened and was subsequently managed, Ira was left with poor consciousness. She slowly and slowly lost the ability to respond! We returned home to Pune after a frustratingly long stay in Mumbai on 14th July 2017- after 8 surgeries, 1 MRI, and 16 CT scans, and with 2 ommaya reservoirs and 1 VP-shunt implanted in the child.

Later, in October that year Ira underwent another surgery for removal of the reservoirs. They were infected with a residual infection of the meninges.