This will be the first time that I am posting a photo of Ira while in the hospital. This was taken on the day of her surgery, just before I carried her into the operation theatre (OT). Pictured here is Ira wearing a head-cap over the gauze covering the wound from the biopsy two days earlier and wearing a children’s hospital gown. 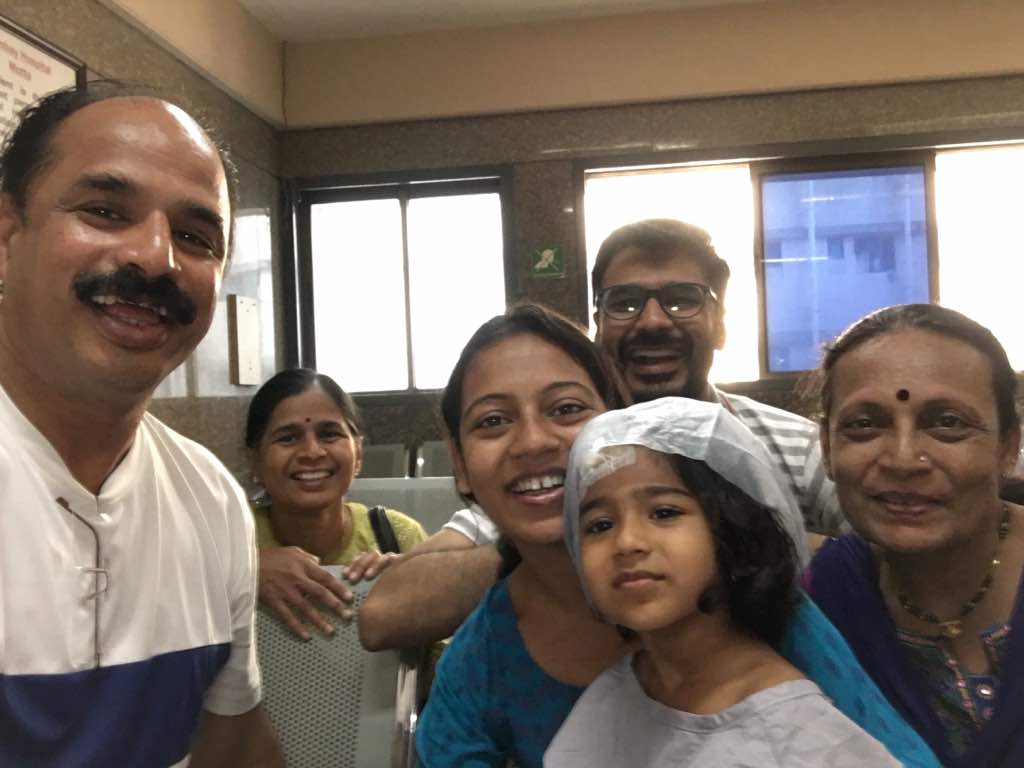 It was the 4th of May 2017. While we waited for the hospital staff to finish readying the OT, Ira sat on my lap skimming through the pictures on my phone. She especially liked the one in which she was wearing a saree. We kept playing who’s who in the pictures till the doctor peeked from the closed doors of the OT saying “let’s go”. 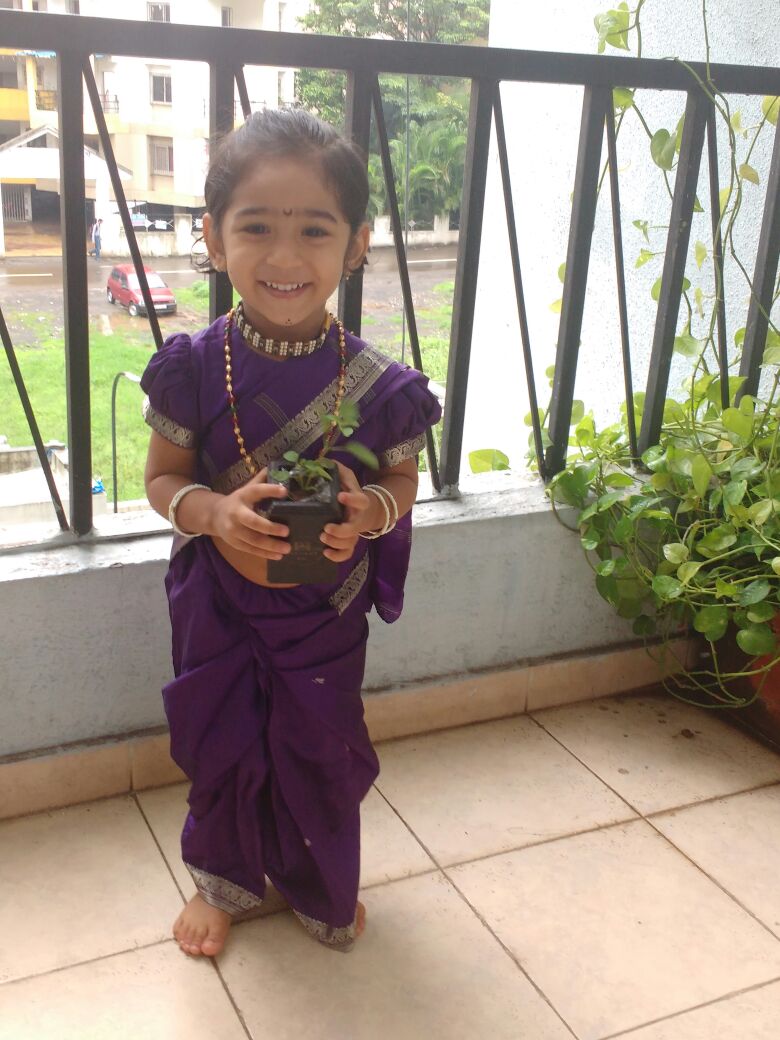 I picked her up, carried her to the first lobby of the OT and made her sit on a stretcher. Perhaps she sensed something- dread or fear. I don’t know. She never could tell me later. But she clenched on to me tightly, trying to hold on to me and not letting go of my hand. The anaesthesiologist gently took Ira’s hand in hers and pushed a little of a pale yellowish solution in a syringe through the intracatheter. It was not as easy as it sounds. Ira kept struggling until her neck fell back and her body went limp with the sedative.

What I remember the most though are the tears which had welled up in Ira’s eyes. They ran down her cheek while she looked at me- may be helplessly, a little accusingly and full of fright. That image of Ira sitting on the stretcher, clutching my hand and crying while they pumped her body with the anaesthesia remains as vivid today. I wish I would have said, “Please cancel the surgery”.

It was the longest that anyone of us have ever waited! We tried to be composed, each one of us, sitting on those 3-seater metallic benches which are quite uncomfortable by the way. The Bhaktambar Stotra, a considerably important Jain Sankrit prayer, played continuously in the background on a portable device. I tried to rest with my feet up on the arm of the bench, but sleep was difficult.  By 1:30 when Ira was still behind those closed doors the anxiety levels started rising.  Dr. Deopujari himself appeared at the OT main doors a few minutes later.

“There’s a part of the tumour that is still stuck. We are trying to remove it but every time her heart rate increases beyond the normal range. We are going to wait for a while before we attempt again.”

Ira was in surgery was 7 hours! We didn’t leave the waiting area for all the while. (Thankfully food was taken care of by Juhi’s mom –delicious theplas and pickle!)

When the doctor called us to the main doors, I saw Ira being wheeled on the stretcher towards the elevator to the ICU. One hand was tied with a gauze to the side rail of the stretcher and the other she flailed wildly. “She’s been struggling a lot. She was in and out of the anaesthesia a couple of times. Dr. Deopujari will see you in the neuro-recovery room” Dr. Vikram Karmarkar, a team member of Dr. Deopujari’s said.

I saw Ira in the neuro-recovery room a few minutes later. It was a shock! There was an intracatheter on every limb, a small tube came out from her nostril and was pasted against the cheek, her hip portion was covered in thick gauze, she was breathing through a tube attached to the ventilator with a roll of gauze placed between her teeth, her head was tightly bandaged with crepe cotton bandage and there were smears of blood on her feet and arms. Meenu sister was pulling out a pipe, like that attached to a vacuum cleaner, from beneath her sheets. I later realized that the pipe was part of a warmer intended to keep Ira warm against the freezing temperatures of the OT. Silly me!

Dr. Deopujari made us known that “As opposed to the committed 100 %, I think we have been able to debulk 85 to 90 % of the tumour. It was not possible to remove it entirely. There is 50 % weakness on the left side, which will gradually recover strength. Right side is ok.”

They didn’t allow me to stay with her that night. Ira was going to be under the effect of the anaesthesia, hence was bound to sleep through the night. The next morning was planned for tapering of the sedatives and weaning off the ventilator. I had my first good meal that evening since her diagnosis. The worry did not leave me, yet I believed and hoped that we had solved the problem or whatever it was.

You can read the prologue here for the happenings of the following day, when she spoke for the last time ever.

The neurosurgery was then followed by complications, and then some more complications including seizures, involuntary movements, hydrocephalus, meningitis & ventriculitis. I would like to deal with each complication separately (in following blogs) as each is a different toughie by itself.

Meanwhile here are a few articles as medical references that might be useful for patients, families and doctors too.